How to Get the Best Out of New York City

My wife had a big milestone birthday this year so we went to New York City for the weekend to celebrate, just the two of us.  It was our first trip alone without the kids in 2 ½ years, and an amazing weekend of culture, food, theater, art, and beautiful weather.  New York City is Disneyland for adults, and it’s always seemed like the center of the universe to me.  It’s the great intersection of cultures, the world’s epicenter of food, art and entertainment.

Springtime is gorgeous, Central Park is green, the boroughs are blanketed in flowers, and there is that buoyant sense of revival and renewal that always accompanies Spring. Close your eyes and you’ll hear Gershwin drifting on the breeze.

I’ve been traveling to New York since I was a kid, and I’ve learned a lot about the city and how to see it.  Here are some tips & pointers to make your stay in the Big Apple a little better.

You can come back to New York an unlimited number of times and have a completely different trip each time.  Focus on anything you want over a 3 or 4 night trip, or extend longer.  We want to spend a month in New York in the future when our boys are older.

There are so many different types of New York trips.  Are you a foodie?  The best restaurants in the world are here.  Sports nut?  Catch your favorite teams at Yankee Stadium, Madison Square Garden or Metlife Stadium.  Art connoisseur?  The best museums & galleries in the world.  Theater nut?  Duh! 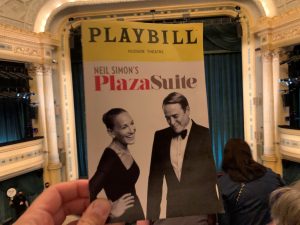 For me it’s always been the theater.  We came to see the Plaza Suite, a Neil Simon play starring Sarah Jessica Parker & Matthew Broderick at the Hudson Theater.  It was hilarious and such a blast to see the chemistry between those two.  Their run with the show ends on June 26th, catch it while you can!  We also went to see “Sleep No More” which we’ve been wanting to get to for a few years.  It’s a wholly unique interactive play set in an old 5-story warehouse in Chelsea, renamed the “McKitrick Hotel”, where you begin on the top floor and work your way through the set pieces down to the bottom floor, and the actors perform around you.  You are encouraged to rifle through drawers and desktops as you unravel the plot (hint: it’s based on Macbeth).

Regardless of your interest, you’ll find something to enjoy in New York City.  If you’re going for the first time, do the touristy things like the Statue of Liberty, Times Square, Central Park, get that all out of your system.  The hop on/off bus tours are a great way to get an orientation of any new city.

I usually stay on Times Square, it might be just a habit, but I like the energy there even though Times Square itself is always a madhouse.  It’s also steps from Broadway, and centrally located in Manhattan to easily access the other boroughs.  I use the Marriott Marquis, it’s a very nice hotel with large rooms for New York, and a beautiful restaurant that overlooks Times Square. I’ve also stayed at the Edison Hotel, it’s a good basic hotel in a great location, and the price is right.  The Edison also has some upgradeable suite accommodations, including one with a large balcony (extremely rare for New York!).

Next time we have vowed to branch out and stay maybe in Chelsea, Soho or even Brooklyn.  What are you there to see?  If it’s theater, then Times Square might be best.  If it’s museums, the most iconic ones like the Met or MOMA are around Central Park, maybe stay at the Plaza (maybe the Plaza Suite, if you will).  Food?  Manhattan, Little Italy & Soho are great options. 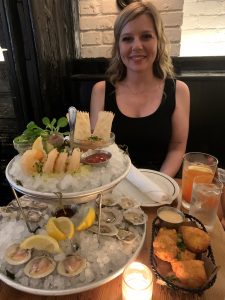 It’s arguably the culinary capital of the world.  Some of the most exciting and innovative chefs, and some of the greatest restaurants on the planet are in New York City.  Every type of cuisine imaginable, you can find it here at a wide range of prices.  On the high end, theres Scarpetta for Italian, Cote for Michelin Star Korean Barbecue, Sushi Nakazawa (of Jiro Dreams of Sushi fame) or Eleven Madison Park who bill themselves as the “World’s Greatest Restaurant”.  Other iconic restaurants like Tavern on the Green are worth the trip, even if they are a bit more gimmick than quality.  The food, atmosphere and history are enough.  New York is famous for pizza – Louie & Ernie’s in the Bronx; Sal & Carmines on Broadway; Rizzo’s in Queens; John’s of Bleecker Street.  A million more.  You can find pizza and the quintessential NYC Deli on almost every block.  Pick up a bagel & lox for a quick nosh in the morning or a pastrami on rye for lunch, you can’t go wrong.  Every time I come home from New York I wonder who shrunk all my pants.

There are 4 basic ways to get around New York – The Subway, Taxi/Rideshare, Citibike or your own two feet.

The Subway system is one of the best in the world and easy to Navigate once you figure it out, with stations located throughout Manhattan, Brooklyn, Queens and the Bronx and service 24/7.  Maps are available to carry with you but Google Maps now features all Subway Routes, and will create a route for you including train changes.  Buying tickets is also easier than ever with kiosks accepting credit cards, or you can simply swipe your ApplePay from your phone at the turnstile now instead of buying a subway card.

Taxi’s in New York are ubiquitous, as are rideshares like Uber, but flagging a cab in New York City is a rite of passage.  Be careful of the time of day though.  If you are trying to get across town at rush hour, you are better off on the Subway or even walking.  Traffic in New York is insane, it can take an hour to go 10 blocks.

Citibike kiosks are everywhere, and you’ll see people riding them all over the city.  They are electric “pedal-assist” bikes that you can pickup from any kiosk and ride for an hour or all day.  You are timed through an app and charged at the end of your ride when you return the bike to a charging station.  There are also rental companies.  We rented e-bikes from Unlimited Biking in Manhattan and rode all over the city, across the Brooklyn Bridge for lunch in Brooklyn and then back across the Manhattan Bridge, up Riverside Park and back into the city.  New York is a very bikeable city, with established bike lanes on every street.  Just be very careful of people opening car doors! 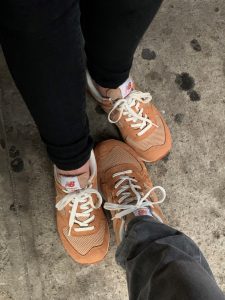 Walking is my favorite way to get around New York, although the e-bike is now a close 2nd.  A couple of important pointers, have a good pair of already broken-in walking shoes (I actually wear sturdy hiking boots), walk on the shady side of the street and don’t worry about carrying an umbrella, you can find them on every block and they cost a peanut.  I love to navigate the city at a slower pace, people watching along the way and stopping for street food like a hot dog or gyro.  It’s a visceral experience of the city, the good and the bad, the smells and sounds and lights and architecture and people.  The opulence, and the poverty.  It all collides in a thousand different ways right there on the sidewalks of New York.

Walking is in fact my favorite way to get around any city.  Especially at night in the cool air I can stroll for hours & miles, pausing whenever I feel like it to take pictures or just sitting quietly and absorbing the surroundings.  Plus it’s great exercise.  We ate our way through New York, but you don’t feel so bad about it if you’re walking 10 to 15 miles a day.

What are your favorite things to do in New York?  What are your never-leave-home-without-it pieces of travel gear?   Let us know!

See it for yourself!

I have reserved tickets for Plaza Suite at 8PM on June 22nd in Dress Circle @ $230 each.  The packages below start at $1098 per person and include flights and 4 nights hotel.  Do you have your own favorite hotel in New York?  Call for pricing. 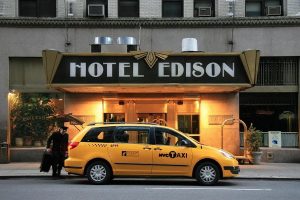 Including nonstop flights on American

Including nonstop flights on American