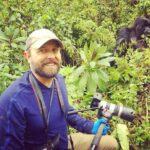 Ron Chapman gave us the keys to the castle.  It was only by chance that Ron met my dad (also Ron) at a happy hour in 1971 and kept his business card.  The legend is that dad told him “Keep me in your hip pocket” and a short time later Ron called him to put together a Hawaii package to promote on air, the rest is history.  I’ve told this story so many times this year, as we celebrate the 50th Anniversary of that first trip to Hawaii.  To me it never gets old, and it feels surreal to now be memorializing the man at the center of it all.  It would be impossible to quantify the impact that Ron Chapman had on our lives, but I suppose the best metric to use would be time, because here we are 50 years later still doing this. 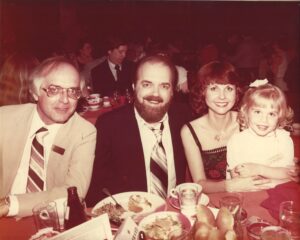 Ron was very close to Sharon, a mentor, confidante and friend for more than 40 years.  I can hear the pain in her voice, and others I have heard memorialize Ron today.  If you were close to him, even if you were a listener for all those years, this is painful.  The man is gone, but it also feels like we’ve lost something, a version of Dallas, that we can never get back.  I can still hear Ron’s soft voice whisper his favorite one-word motto, “onward.”

Listening to Mom talk about him this morning on KLUV, that whole life flashed before my eyes.  There are so many memories of KVIL and KLUV trips, of riding in the car and hearing that iconic laugh, Suzie’s wacky characters, the fun, the music.  If I ever hear “Whos goonna drive you hooome” I am instantly back in the backseat of mom’s car on the way to school.  Ron was the soundtrack to my childhood.

My first time on the radio was on Ron’s morning show at KLUV, when my mom insisted that I call in to announce the KLUV Costa Rica trip while she was overseas.  I was very green and it did not go great.  Ron had a reputation, and I was quite honestly terrified to go live on air with him, but he was warm and professional and when he finally went to commercial he goes “Casey…… we’ll do better next time” and I still laugh about that.  Part of Ron’s genius was the subtlety of his short constructive critiques.  That was bad Casey, but there’s a next time. 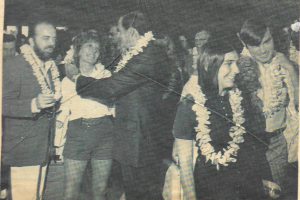 I called in to KLUV to share some of my own memories of Ron this morning as well, and a common theme of everything I heard or read today, is how Ron elevated everyone he ever worked with.  Ron was a builder of people, he invested in you.  And not just if you worked with him, he invested in you too, dear listener.  Ron’s show was always about building people up, honoring and loving our community.  I watched an old news clip of Ron this week where he said that he wanted to hold up a mirror to Dallas “This is what we look like folks, and by the way, you’re looking good”.  In 35 years on the air with Ron, KVIL and KLUV never made anything from the World Tour, he wanted it to be a benefit for the listeners and would say so on air.  All of the bucket list experiences, the love stories that came from our trips, the call-ins from across the world, Ron reveled in playing a part in all of that happiness.

His reputation for being stern and demanding, and frankly terrifying was well earned, but in the way that your dad or your coach might be when he wants you to be your best.  And he was the best, he really was.  He transformed radio, Ron is the reason you hear NFL football on FM Radio, he was the first in the country to do it, convincing Jerry Jones that the clear sound of FM could capture the energy and ambience of a stadium and he was right.  Other stations would fly people into Dallas just to listen to KVIL and ripoff what they were doing, but of course no one could recreate the magic because it was just Ron.  He was Tom Brady, he’s the guy who worked harder than everyone, the first and last guy in the locker room, the guy who left it all on the field and if you didn’t match that energy you were embarrassed, and you heard about it too.

He was also notorious for calling you, imparting some short bit of wisdom, a compliment, critique, a joke, and then just hanging up.

LeighAnn Adam posted a story this week about a time when she had just started working afternoons at KISS, Ron’s competitor, she got a call in the studio one day and it was Ron.

I heard a deep voice say “LeighAnn, Ron Chapman.  Sounding great, keep up the great work” and that was it.  No Goodbye, just that.

When Ron retired my mom found him an apartment aboard a residential cruise ship called “The World”, where their neighbors were former senators and sultans and captains of industry, and he and Nance spent the next two years sailing around the world and holding court with luminaries where according to Ron, Nance always stole the show.  I bonded with Nance when I accompanied them to Dubai several years ago, and I know this is true.  Ron and Nance were yin & yang, perfectly suited to each other and the affection between them was so obvious and sweet.  I’ve thought a lot about Nance this week.

During their time aboard the ship, Ron would call us from some remote place across the world, and whoever picked up the phone he’d say something short and just hang up, it was awesome.  “Ron Chapman, I just sailed past the Southern tip of Africa.”  Click.  “Ron Chapman, I’m looking out my window at Rio de Janiero.” Click.  He was touching base and saying a small thank you, in the most Ron Chapman way.  Once I got to the phone first and he said “Casey, Ron Chapman.  I am 300 miles north of the Arctic Circle in the middle of the ocean, and I’m calling you from outer space.  Tell your mom hi.”  Click.

What a guy, what an extraordinary life.  Ron Chapman really lived.  We love and miss him.